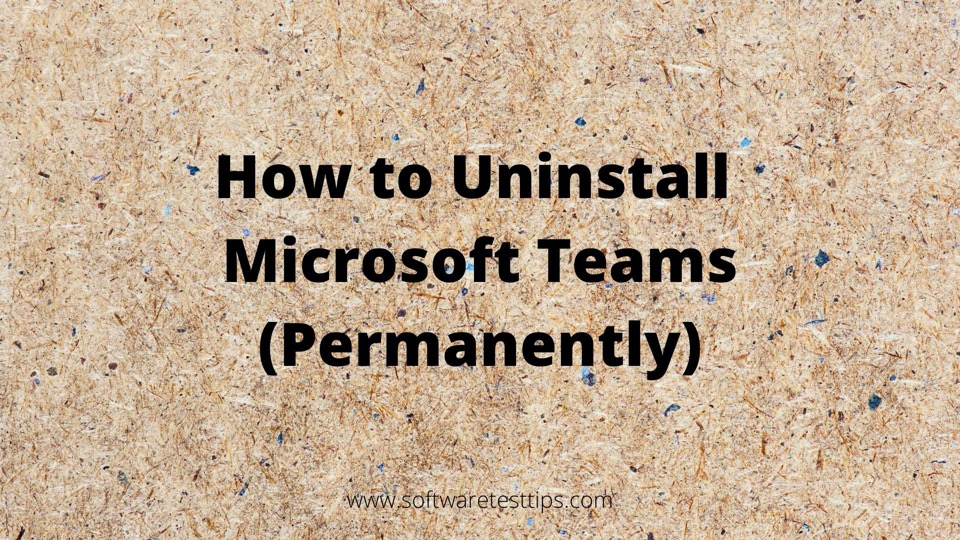 Lately, the users of Microsoft Teams have become frustrated with the application launching itself at the time of restarting or booting the computer. Moreover, even if they uninstall and delete the Microsoft Teams application from their systems, it reinstalls itself like a stubborn guest who won’t leave.

This could be extremely annoying as the app launches itself and pops up every time you turn the computer on. Having said that, let’s answer why MS Teams keeps reinstalling itself despite being deleted.

This article will give you a step-by-step guide on how to uninstall Microsoft Teams permanently from your computer on multiple Operating Systems such as Windows 10, Mac OS, or your smartphone (iOS and Android). So, let’s get started!

Note: Keep in mind that the steps to uninstall MS Teams will vary as per the device you’ve installed the program on. So, make sure you read the steps for your device and follow them properly.

There are three ways to uninstall Microsoft Teams on Windows 10 and we’ll know and understand them below:

1. How to Uninstall Microsoft Teams (And Teams Machine Wide Installer) on Windows 10 Via Windows Settings?

Step 3. In the list of apps, look for ‘Microsoft Teams’ and uninstall it. A pop-up message will come up asking you to confirm the action. Click ‘Uninstall.’

Step 4. Also, find ‘Teams Machine-Wide Installer’ in the same window and click on it. Then, click on ‘Uninstall’ to uninstall it as well.

2. How to Remove Microsoft Teams From Windows 10 Via Control Panel?

Step 1. Click on the search button next to the Start Windows icon located at the bottom left corner of your screen.

Step 2. Type in ‘Control Panel’ in the search bar.

Step 3. Hit on “Open” to open the control panel.

Step 5. A window will open up, look under the header “Programs and Features.” Click on “Uninstall a program” located there.

Step 6. Now, a list of all the programs installed on your computer will come up. Keep scrolling to find “Microsoft Teams.”

Step 7. Right-click on the option and click on “Uninstall.”

Step 8. Look for “Teams Machine-Wide Installer.” Right-click on it and click on the “Uninstall” option. This will delete the MSI package as well.

And just like that, you have now permanently uninstalled Microsoft Teams from your Windows 10 OS. This means that the next time you start your system, Microsoft Teams won’t get reinstalled on its own. It will stay out of your system until you manually install MS Teams.

3. How To Uninstall Microsoft Teams on Windows 10 Via Command Line?

You can also uninstall Microsoft Teams on Windows 10 using the command console. Here are the steps you need to follow to do so:

Step 1. Click on the Windows icon located in the bottom left corner of the desktop.

Step 2. Type in “Powershell” in the search bar.

Step 3. Now, right-click on the search result named “Windows Powershell” and click on the option “Run as administrator.”

Step 4. Copy the following code and paste it on the Powershell console:

Step 5. Then, hit the Enter button. That will delete Microsoft Teams from your Windows 10 OS via command line.

How To Uninstall Microsoft Teams From Mac OS?

If you use Mac OS, then, the steps to get rid of Microsoft Teams will be somewhat different. Here, take a look at the same:

Step 1. Make sure that Microsoft Teams is NOT open. Close it if it is launched.

Note: MS Teams has a habit of launching itself the moment your computer starts.

Step 2. Navigate to the dock and then, click on the “Finder” icon.

Step 3. From the dropdown menu, tap on “Applications.”

Step 4. A window containing all the applications installed in your Mac OS will appear. Find the “Microsoft Teams” icon and move it to the trash can.

Step 5. Now, right-click on the trashcan icon located at the bottom of the screen.

Step 6. Tap on the “Empty Trash” option. Make sure you check the trash can for any files or items that you would like to restore before emptying it.

Step 9. Keep scrolling until you find the Microsoft folder and then, click on Teams folder to delete it.

Don’t forget to execute the last step. This is to ensure successful uninstallation of Microsoft Teams from your system.

If you use Linux OS and want to delete Microsoft Teams from your computer, then follow the steps given below:

Step 2. Type in the following command in the terminal:

That’s how you uninstall MS Teams from your Linux system.

How To Uninstall Microsoft Teams From iOS Devices?

A lot of people prefer using Microsoft Teams on their phones. So, if you have MS Teams installed in your iPhone and want to uninstall it, go through the steps given below:

Step 1. First, find the Microsoft Teams app on your iPhone.

Step 2. Tap and hold the MS Teams icon like so for a couple of seconds. You need to hold until the pop-up menu disappears and all the icons on the phone screen wiggle a bit.

Step 3.  Hit the “Delete App” button or tap on the “X” (cross icon) shown on the Microsoft Teams app.

Step 4. Now, confirm the action by clicking on “Delete.”

That’s it! Uninstalling Microsoft Teams from your iPhone is pretty simple indeed.

How To Uninstall Microsoft Teams From Android Devices?

Step 2. Keep scrolling until you find the Teams app or search for it.

Step 4. While still holding onto it, drag and drop it over the Uninstall icon located at the top of your screen. And that will uninstall the Microsoft Teams app from your Android smartphone.

Step 3. Open the app when you find it in the search results. You will be taken to the Teams app page on Playstore.

The cache created for Microsoft Teams is not linked to the installation. It contains information about MS Teams like icons, message history, policy settings, etc. So, it might be left behind on your system even after you have uninstalled Microsoft Teams.

MS Teams can cache information in the following two folders:

It is important to delete these folders to make sure that Microsoft Teams has been removed entirely. Given below is a Powershell script to help you do so:

>Remove-Item (deletes all folders within the matching directories)

How To Ensure That Microsoft Teams Doesn’t Get ReInstalled Again?

You can set a registry value to keep your computer from installing the Microsoft Teams again. Go through the steps given below to make the changes on your computer:

Step 4. Change this value to 1 so that Microsoft Teams cannot get installed again.

Why do Users Want To Get Rid of Microsoft Teams?

MS Teams is a tool for business and team collaboration. However, users keep facing and have reported several shortcomings with the application lately. Due to the same reason, they don’t prefer using it and would like a better alternative.

Given below are all the drawbacks of Microsoft Teams:

Microsoft Teams often doesn’t send you notifications about important things. For example, if you are creating a new group and the label has been taken already, MS teams won’t send you a notification about the same.

In MS Teams, you’ll have to go to advanced search to get almost everything you need. Finding files the normal way is quite difficult and obviously, it’s tedious to make an advanced search all the time.

Users have experienced a lot of lags in MS teams. There are also several features lacking that you can get with other alternatives.

There are several limitations that users have to face with the Teams app’s features. For example, the permitted maximum number of channels is 100 per team. Moreover, the building of the Teams blocks isn’t flexible either. Also, Teams doesn’t have group calendars, so users need to switch somewhere else to review the group calendar.

Moreover, you need to perform certain other actions too to make sure that it doesn’t reinstall again. We hope this article has helped you successfully get rid of Microsoft Teams.

Why can’t I uninstall Microsoft teams?

A lot of users have faced the problem of not being able to uninstall Microsoft Teams from their computer because it keeps reinstalling itself. The reason behind this is that you might not have properly uninstalled the app. So, to ensure that MS Teams doesn’t reinstall itself on your computer, you need to execute one extra step and that is uninstalling the “Teams Manager Wide Installer” that is the MSI package that comes along with the Teams app.

Is Microsoft teams a virus?

No, Microsoft Teams is not a virus and is quite safe to use since it is a Microsoft product. However, since it pops up every time you restart or start your system, people do feel very annoyed with it.