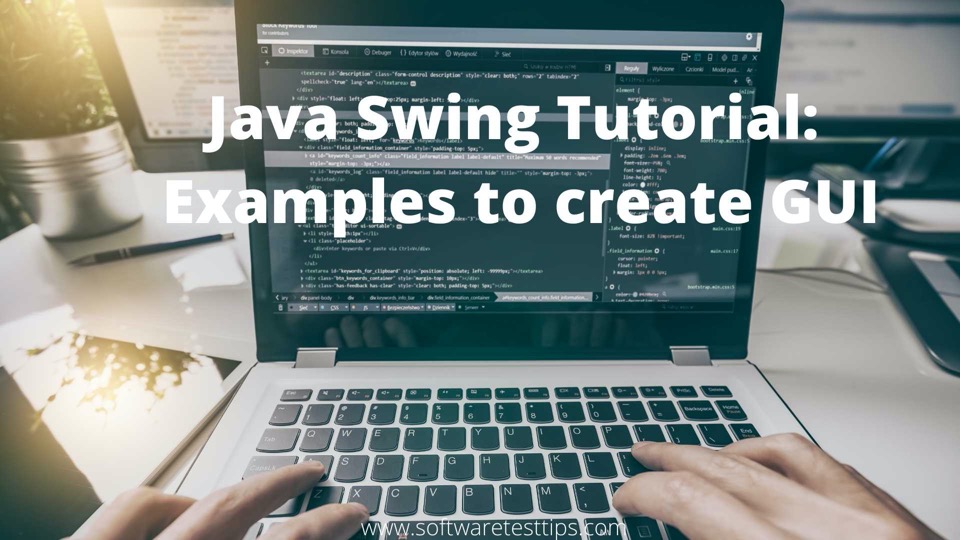 What is Java Swing?

Earlier, the Java language used Abstract Window Toolkit (AWT) for developing the graphical user interface of web applications. Like the Swing toolkit, the abstract Window Toolkit also belongs to Oracle’s Java Foundation Class (JFC). The Java Swing toolkit is a more flexible and enhanced toolkit than the abstract window toolkit for developing GUI. The components present in the Java Swing toolkit are more manageable and robust than the AWT toolkit.

Java Swing is based on the Model-View-Controller architecture. The fundamental idea of this architecture is it categorizes Java Swing components into three different elements. These elements are Model, View, and Controller.

The first element, Model, contains the data of a particular Java Swing component. Next, the view element displays the visual representation of the data present in the Model element. Lastly, the controller allows users to enter input on the view element, and the result is reflected on this element. The model element of the MVC is present separately, whereas view and controller elements are combined.

The following are some significant characteristics of Java Swing.

Java Swing components are platform-independent. They do not require any specific code to be run on a particular platform. Therefore, you can use Java Swing GUI components on any platform from anywhere.

All components of Java Swing are grouped into three elements, Model, View, and Controller. The MVC architecture is exceptionally beneficial and advantageous. If you desire to modify one single component, it will not affect the other members. Hence, such architecture is referred to as loosely-coupled architecture.

Java Swing is highly flexible and manageable. It allows any modifications during the run time. You can modify the graphical user interface without performing any changes in the application code.

Let us see how the Java Swing and Abstract Window Toolkit differ from each other.

So far, we have seen Java Swing, its features, and the difference between two java toolkits for GUI implementation. The implementation of these toolkits is possible only if you have a complete Java set-up on your desktop. The following section will help you in setting up the Java environment on our Windows 2000/XP desktops.

Setting Up the Java Path for Windows 2000/XP

Firstly, you need to download the Java SE from the link Oracle Java Archive. You must choose the Java SE version that is compatible with your operating system. After downloading the Java SE, you need to run the .exe file and install Java on the Windows desktop. But, you can run any code using these steps. You need to set the environmental variables’ path to the Java executable. The following steps will mentor you in setting up the Java path for Windows.

Suppose you have installed Java SE, and it is present in the directory,  c:\Program Files\java\jdk. Start setting up the path for Java.

Your path is set, and you can run any Java code comfortably on your desktop using the command prompt.

How to Run the Java Program on Windows?

User Interface elements are the components that are required to develop the GUI of any web application. UI elements depict the visual representation of code. Several Java UI elements are present in the Java Swing, like tables, lists, tabbed panes, etc.

This aspect of the Java GUI implies how the UI elements should be placed on the screen. In other words, how will the GUI of any web application look?

Behavior is the event caused when the user clicks on any UI element. For example, if a button has ‘Sign in’ text on it, you sign in to a particular website whenever you click on that button.

You can create a new component using the constructor class, called protected Component().

The constructor class used to create a new Container is Container().

There are three primary components of the container class, JFrame, JApplet, and JPanel.

The JFrame class is the component of the top-level container of the Java Swing. It acts as a screen for all other low-level components, like buttons, textfield, labels, radiobuttons, etc. Whenever you need to create a new frame, you have to use JFrame().

Applets are programs that can be run on web browsers. Every applet in Java has a life cycle consisting of init, start, stop, destroy, and paint methods. Applets can be written in any other programming language and run on the Java Virtual Machine (JVM). The JApplet class is used to represent the Applet function.

Another primary component of the Container class is JPanel. This component is used to handle and organize all other components and layouts. The function JPanel() is used to create a new panel in the Java Swing GUI.

The constructor class used to create the JComponent class is JComponent().

We shall see a Java code that will create a Frame.

Use Our Free Online Code Compiler

The frame of width 400 and length 400 gets created. The title of the frame is “This is an example of creating Frame.” You can add any other low-level components into the frame.

We use the JLabel component for displaying the text or image on the frame. By default, the text we enter for the label is aligned vertically at the center position. The JLabel() constructor is used to create a label.

Another component is JButton, which creates buttons on the screen. You can also label a button and add an event to perform a specific function whenever it is clicked. The constructor used to create a new button is JButton().

The JColorChooser component is used to change or select a color from the color palette. It creates a dialog box. If you use the constructor, JColorChooser(), the default color is white. For using the specified color, you can use the JColorChooser( Color initialColor) constructor.

When you click on the button named ‘color,’ the second window displaying colors appear.

JCheckBox is another Java Swing GUI component, which enables users to select and deselect multiple choices. It has a state called ‘on’ or ‘off.’ When the user clicks right on the checkbox, the state changes to ‘on.’ The constructor class used to create checkboxes is JCheckBox(). You can select multiple checkboxes as per your requirement.

We see radiobuttons in many forms or applications. It is specially used for selecting gender, female, or male. When only one option is to be picked out of multiple possibilities, the radiobutton is used. The constructor class to create radiobuttons is JRadioButton(). You can choose only one radiobutton at a time.

The JScrollBar component in the Java Swing GUI is used for scrolling purposes. Users can insert the scrollbar vertically and horizontally. The constructor used to create the scrollbar with initial values is JScrollBar(). If you want to change the orientation, you need to specify it, like JScrollBar(int orientation).

Another Java Swing component present in the Container class is JProgressBar. It displays the progress in percentage. One of the common examples of using the JProgressBar component is to show the battery percentage of mobile phones. JProgressBar(int min, int max) is a constructor that generates a horizontal bar with a specified least and maximum values.

JSlider component of the Java Swing GUI generates a horizontal slider used to select the value between the specified range value. The JSlider() constructor produces a slider with default values ranging from 0 t0 100, and the initial value is 50.

Java is the flexible and platform-independent programming language. Java Swing package is used to build the graphical user interface of any web application or website. We discussed the Java Swing package, its features, and the difference between the Abstract Windows Toolkit (AWT) and Java Swing.

Lastly, we have gone through some significant Java Swing GUI elements, their declarations, and their respective examples. Each Java Swing GUI component is explained well with a detailed example. This article is a complete guide for Java Swing beginners.