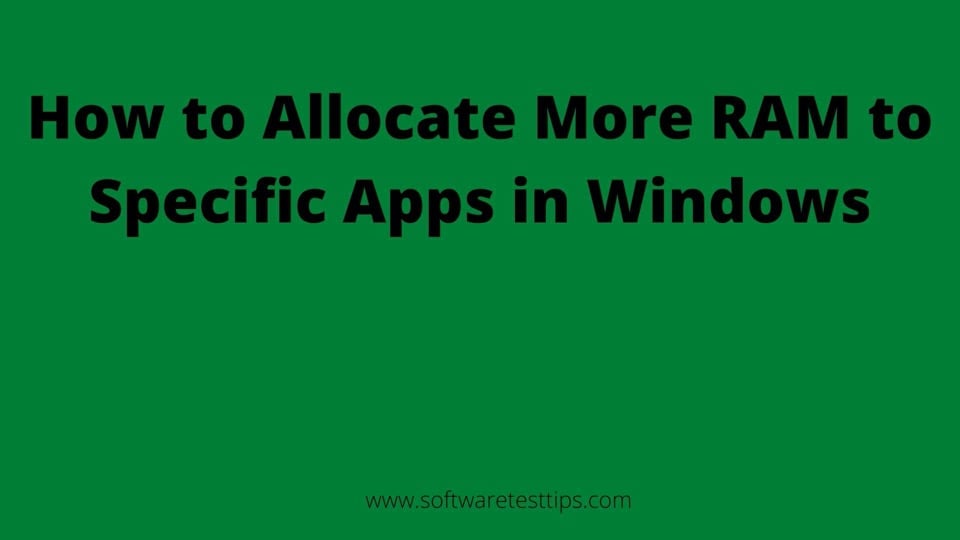 Random-access memory (RAM) is one of the most critical components of a computer’s performance. If the available memory is low, applications or programs will not work as intended. They will perform slower and may even crash in the middle of your job. Allocating extra RAM to a program is an intelligent practice.

You should have enough RAM loaded on your computer to get the best results. You may need to deduct the amount of memory used by other background apps. Allocate the additional RAM to your application that needs it. In this post, we’ll go over the various methods for allocating more RAM to a program to boost performance if necessary.

Methods for “How to allocate more RAM to Apps” in Windows

Making this adjustment will ensure that your computer prioritizes the program over others. The capability is helpful for those who are using an outdated computer or a low-end device. Newer models, as well as high-end appliances, have more memory.

You’re not multitasking but still have a low quantity of free RAM on your computer.

Your background apps are most likely consuming a substantial amount of memory. Turning off these background apps will improve overall performance. The expense of occasional slower launching or indexing times.

By searching for Background apps in the Windows search box, you may disable background applications. You may select which apps can run in the background from this menu.

Turn off the program’s process that runs in the background. You may also use Task management to choose undesired apps, right-click on them, and disable them.

The computer can compensate for the lack of physical memory by using virtual memory, also known as page file memory. It moves data from RAM to disc storage for a short period. Let’s look at ways to make the page file size bigger.

Another–and possibly the best–option is to increase the amount of RAM available in a program’s settings. It is especially true in games like Minecraft, which are frequently modified. Many mod-packs will not operate if you don’t have more RAM than the default.

Even within Minecraft, how you allocate RAM is dependent on the launcher you choose. For example, you can change the wording under JVM Argument from Xmx2G to XmX2n on the default launcher’s Installations tab by clicking New > More Options. The “n” is the amount of RAM you wish to utilize.

If it’s even possible, each game and software will have its way of allocating more RAM. Regardless of how much RAM one has available, many applications are coded to a set amount of RAM usage. It is based on your operating system. Microsoft Excel, for example, is limited to 2GB of RAM on 32-bit operating systems.

How To Allocate More Ram To A Minecraft Launcher Server

Finally, you might decide to operate your own Minecraft server. The server won’t load or support users if it doesn’t have enough RAM, and any modifications you make in-game will lag.

Risks of Using Too Much RAM

RAM is, for the most part, neutral. Because you used too much RAM on an application, you are unlikely to do catastrophic damage to your system. The worst possibility is that a program crashes or that background apps behave strangely.

There are situations, though, when it can result in more significant consequences. A stack overflow mistake is familiar to everyone who has worked in programming. When the call stack memory is exceeded, a problem occurs. A crash will appear as a result of this issue. When an application throws the “Not Responding” error message in Windows, a similar scenario occurs.

It happens when it uses up all of its RAM and can no longer function properly. Waiting for the RAM to clear can sometimes help. The most common solution is to use the Task Manager to force a program to close.

Most of us believe that adding more RAM to the game will help us have better and smoother Windows gaming sessions. Unfortunately, most people do not have the bucks to add it to our laptops or computers.

The game’s design is compatible with the operating system, and it requests the RAM it requires from the available memory. You can’t give the Windows Stream games more memory is a bummer, but you can quickly free up RAM.

Extra RAM can make a big difference in terms of performance or multitasking. The procedures outlined in this article are safe for your computer. If you have enough memory but are having trouble running software within it, look into these options.

How much virtual memory for 16GB RAM?

Suppose your storage capacity is 16GB. You might wish to set the Initial Size to 8000 MB and the Maximum Size to 12000 MB. Remember that this is in MB, so multiply by 1000 to convert to GB.

How do you limit RAM a program can use?

The only practical strategy to reduce memory utilization is to run fewer programs. Even seemingly small, straightforward applications might use hundreds of megabytes. The operating system can consume up to 2GB of memory while not in use.

How do I allocate additional memory to a game?

Right-click the Windows taskbar > pick Windows Task Manager > open the game where you wish to increase RAM. Then, scroll down under the processes section. You’ll see a list after scrolling. Simply right-click the process and then drag the pointer to the set priority option.