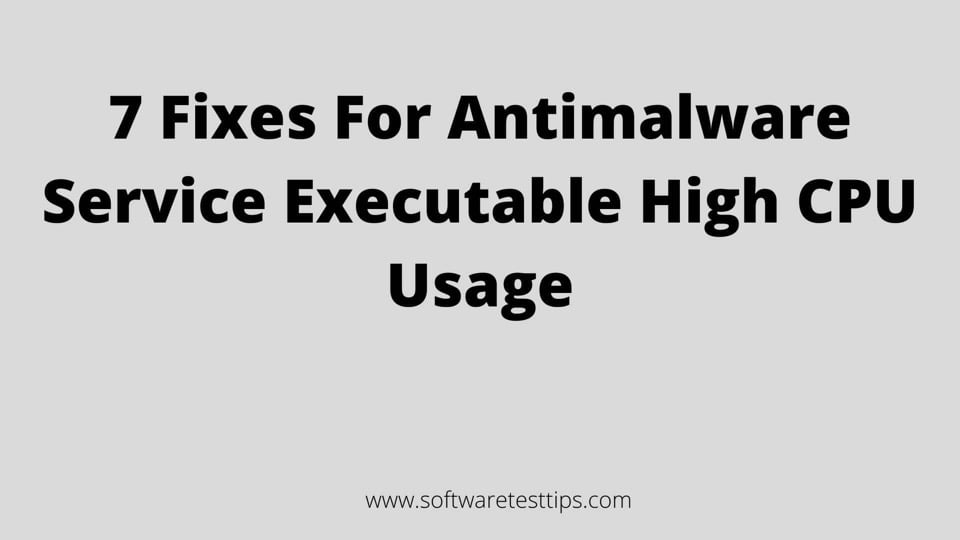 What Is “Antimalware Service Executable”?

Windows Defender service is a built-in feature of Windows 10. It replaces the free Microsoft Security Essentials antivirus for Windows 7. It assures that all Windows 10 users have one installed and operating at all times. You have an out-of-date antivirus program installed.  Windows 10 will automatically disable it and replace it with Windows Defender.

Windows Defender’s Service ”the Antimalware Service Executable” process, always runs in the background. It’s in charge of scanning files for malware when you open them. Running background system scans to look for malicious software. Updating antivirus definitions and whatever else a security program like Windows Defender has to do.

The process is called Antimalware Service Executable in the Task Manager’s Processes tab. Its file name is MsMpEng.exe.

What is “msmpeng.exe”? Is it a Virus?

Go through the background processes list in Task Manager. Antimalware Service Executable is a process with the file msmpeng.exe as its counterpart.

This procedure enables Windows Defender to scan your computer for threats continuously. It provides real-time malware and cyberattack protection. At the same time, it may be the source of abnormally high CPU utilization.

Another function of Windows Defender that could be slowing down your PC is Full Scan. It runs a thorough scan of all of your computer’s files. Full Scan focuses hard on the CPU and isn’t hesitant to consume all of your system’s resources. When it is running, you may suffer latency, delays, hanging, and other system interruptions.

When an antivirus tool runs a scan, it is common for it to use up system resources. Windows Defender is significantly more greedy than the majority of antivirus programs. It has a history of using a lot of CPU for a long time. Perform scans as soon as you turn on your computer to send an email or check a website rapidly.

It’s critical not to turn off Windows Defender without first installing a different IT security solution. Allow the application to complete its task, resolve any threats.

No one heard of any viruses that purport to be the Antimalware Service Executable process. Windows Defender is an antivirus. Any malware that tries to accomplish this should be stopped in its tracks. It’s typical for Windows Defender to be operating as long as you’re using Windows and have Windows Defender turned on.

If you’re truly worried, you can always conduct a scan with another antivirus program to be sure there’s nothing dangerous on your computer.

Why Is CPU Usage So High?

It also checks files as you view them and install updates with information on new threats regularly. This CPU usage could mean that Windows Defender is installing an update. You’ve just accessed a massive file that requires more time to analyze.

It is typical for any antivirus tool, as they all require some system resources to examine your computer and keep you safe.

Antimalware Service Executable Process often causes considerable memory use. Windows Defender is doing a thorough scan for most individuals. We can solve this issue by scheduling the scans when you’re less likely to notice the impact on your CPU usage.

Disabling Windows Defender entirely may solve the issue. Keep in mind that doing so exposes your machine to a variety of cyberattacks.

See also  13 Fixes For Windows Could Not Complete the Installation

So you should install an effective anti-malware program. Disable antimalware service by the below steps.

There is a chance your machine has been infected with malware that forces the real Antimalware Service Executable to run. In that scenario, you should run a system scan with antivirus software. You may want to do it in Safe Mode with Networking.

You will erase antimalware service executable virus as soon as an antivirus detects some questionable software.

The genuine MsMpEng.exe, on the other hand, does not need to be removed. It’s a valid file that’s completely safe.

Something more nefarious is likely causing Microsoft Defender to slow down your machine. Check your system for any virus that may be compromising its ability to perform smoothly and safely. Conduct a comprehensive system scan with trustworthy and lightweight anti-malware solutions.

Microsoft Defender scans every file on your computer, including itself, throughout its scans. It can lead to some fascinating interactions on rare occasions and is a common cause of system latency. You may simply tell Microsoft Defender to skip itself while doing a system scan to avoid this from happening. Add files in windows defender’s exclusion list to make it happen.

When Windows Defender receives faulty definition updates, it may name specific Windows files as viruses. As a result, we’ll use Command Prompt to remove these updates in this step.

Windows Defender is a valuable feature, mainly because it comes with your operating system for free, but it might drain your PC’s CPU. You may take control of Antimalware Service Executable high CPU usage. Keep your computer running at maximum speed by following the methods outlined in this article.

How do I fix antimalware service executable high CPU usage?

Antimalware Service Executable often causes considerable memory use. Windows Defender is doing a thorough scan for most individuals. Users can solve this by scheduling the scans when you’re less likely to notice the impact on your CPU. Optimize the scan schedule in its entirety.

Why is the anti-malware service executable running?

When you visit them, the Antimalware Service Executable is running to scan for malware and spyware. If there’s anything hazardous, it’ll detect it. Furthermore, it does a background scan of your system for viruses and worms.

What happens if I disable the antimalware service executable?

Why is my Windows Defender using so much CPU?

When Windows Defender is scanning the system for malware, this issue with MsMpEng.exe consuming 100% of the HDD and CPU is standard. While searching for viruses, the Windows Defender scan gets stuck on a few files. When this happens, it should be restricted or deactivated until it can be used typically again.